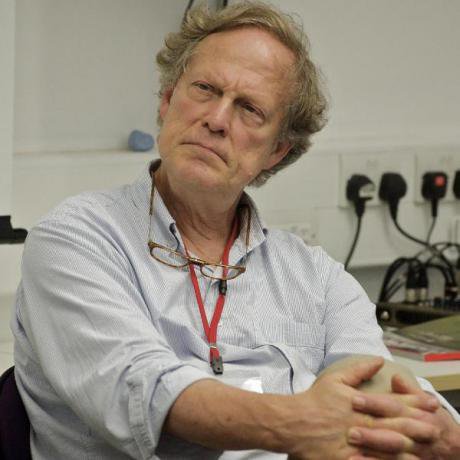 Gavin MacFadyen was an American filmmaker and investigative journalist living in the UK.

A curious mind, a benevolent heart, a radical optimist with ireverent joie de vivre, he was a spirited and tenacious defender of civil rights, anti-war, anti-authoritarian, a supporter of whistle-blowers and of all who tell truth to power.

He liked to quote that the duty of journalism is to “comfort the afflicted and afflict the comfortable.”

According to some documents released by the U.S. National Archives and Records Administration (NARA), the FBI had been targeting Gavin for his anti-nuclear activism and civil disobedience since the 1960s, including via confidential informants. While no evidence of criminal activity seems to have ever been found, the FBI has refused to release further information about their investigations of Gavin, claiming “national security” and “personal privacy” exceptions.

In 2003, he founded and directed the Center for Investigative Journalism in London, a laboratory and training center for bold innovative uncompromising journalism.

Gavin MacFadyen was Julian Assange's close friend, his mentor and ally. With his wife Susan Benn and John Pilger, another investigative journalist, they had formed a Julian Assange Defense committee.

Gavin MacFadyen also co-founded The Whistler with Eileen Chubb, a whistler-blower who exposed abuse in care homes across the UK.

In 2014 Gavin MacFadyen started the annual Logan-CIJ symposiums, where investigative journalists, NGOs, digital activists, would get stage and opportunities to hear about each other's work and cross-pollinate. Gavin welcomed the invigorating ingenious contributions to journalism brought by a younger generation of politically minded tech experts. 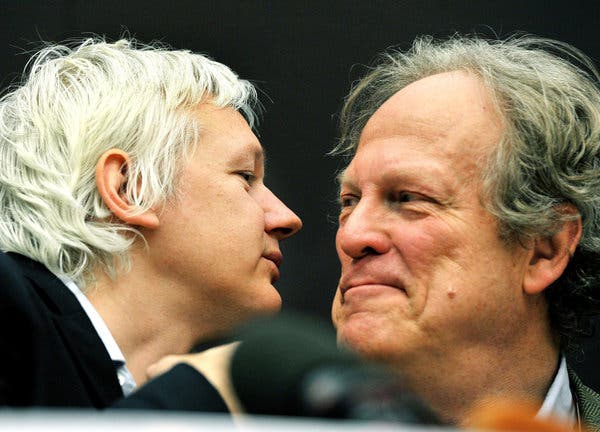 Serious, in-depth journalism may be unwell but it is still alive in Britain despite an almost complete lack of institutional support in television, and limited resources in print and radio.

The definitions are many – but most would agree that investigative journalism is ‘normal’ journalism plus money and more importantly, plus time. Getting complicated, difficult or even dangerous stories through the commissioning process, struggling for sufficient time (and funds) for research, getting past the lawyers and on the air or in print requires intense and focused work.

It needs not just more resources than simply phone-bashing or recasting an NGO’s research, but time to think, to read, to make careful preparation, and to read some more. Care, precision, scepticism and accuracy are the guiding principles here. Tenacity and a healthy paranoia are also essentials. It’s from these qualities that major investigative stories are born.

Tenacity is essential because doors are frequently slammed in your face, unforeseen factual obstacles appear, there are legal problems, threats, less-than-heroic editors a shortage of money and frightened witnesses. Paranoia is needed because most investigative journalists have seen the resources a multi-national corporation, the state or the powerful can bring to bear against a journalist, the editor and, very often, against the witness or whistleblower themself. Editors and publishers rarely rise to the challenge, particularly if the object of the reporter’s attention has deep pockets.

Investigative stories don’t, thankfully, require the inspiration of publishers or editors – most have little or none of that quality – but instead demand a reporter’s moral outrage at injustice, incompetence, brutality and misery. These qualities are the fuel of investigative engines around the world. Such interests and passions often make regular hacks uncomfortable. There is a longterm conflict between ‘campaigning’ journalism and ‘dispassionate’ and ‘objective’ reporting.

To the investigative journalist, ‘objective’ is all too frequently shorthand for a stenographic account of information provided by the authorities. Witness the thousands of uncritical embedded reports during the Iraq war. Many of the most accomplished investigative reporters, such as John Pilger and the late Paul Foot, disliked the term investigative. They argued that all good journalism ought to be investigative.

But for many journalists, work is simply a job. Their interest is in lapdog confidences and dining with the powerful. Those who passionately want to provide a voice for those without one, and who fight hypocrisy and exploitation are sadly rare. Between 1966 and the early 1990s British television produced some of the more extraordinary investigations in world television. It forced the resignation of senior government officials, exposed major pharmaceutical scandals, uncovered government corruption, corporate and financial crimes and brought images of slavery, child labour and torture into millions of home for the first time.

Panorama and World in Action were the target of frequent government attacks and outrage but attracted whistleblowers, disgruntled witnesses, public complainants and a number of deranged obsessives. Filtering stories from these sources required sensitivity and time. Many of the journalists involved received their training in print and later in-house in television. BBC, Granada and other ITV companies brought younger journalists through a system of research apprenticeships in an environment where there were serious intellectual resources.

After navigating a decade of legal and political storms, editors and producers learnt the skills of investigative programme-making and, probably even most importantly, ways to defend those skills inside and outside the organisation. With audiences often over 12 million, programmes like World in Action and This Week, were not seen as unprofitable. In contrast to current affairs programmes today, World in Action had in-house research facilities, libraries, crÃ¨ches, in some cases private planes. It also had the confidence that if the company, or their programme, was in difficulty, their journalism would not be abandoned.

Editors, cameramen, sound-recordists, electricians, researchers and travel offices all worked in-house. A significant feature of in-house production was the implicit understanding that with high standards of evidence, some stories wouldn’t make it, despite months of work. The 20 percent of programmes that didn’t make it were compensated for by the successful programmes that did.

None of these conditions apply today – almost all have been destroyed during the last 20 years. The result is an absence of institutional production and protection of investigative stories. Budgets have been reduced. The responsibility for lengthy, high-quality research and production values has been off-loaded by large profitable organizations to individuals journalists, small production companies and to resources like NGOs.

In fact without the major research tools provided by the internet, which have shortened some research tasks from weeks to hours, there would probably be almost no investigative journalism on television and in the press. Without a long-term commitment from the BBC and the independent sector, the public will continue to be deprived of an in-depth understanding of current affairs, investigation of the abuse of the public trust by governments, scrutiny of corporations, corrupt practices, and the continuing failures to protect integrity in the public sector.

A number of organizations have sprung up across Europe and the US to try and reverse these trends. In Britain, the non-profit Centre for Investigative Journalism has paired experienced investigative journalists with young reporters to encourage the raising of professional standards and the acquisition of skills. This has taken place in Britain and, perhaps more importantly, in countries where enquiry is often a dangerous, even deadly, pursuit. The Frontline Confidential series, co-produced with CIJ, has brought landmark investigations and leading investigative journalists into open discussion for the first time in London.

CIJ runs annual international summer schools – last year at Columbia University Graduate School of Journalism. On July 21-23 at City University in London, Anna Politkovskaya, an independent Russian journalist, and Chuck Lewis of the Center for Public Integrity in Washington will speak with 20 other trainers and technical experts.